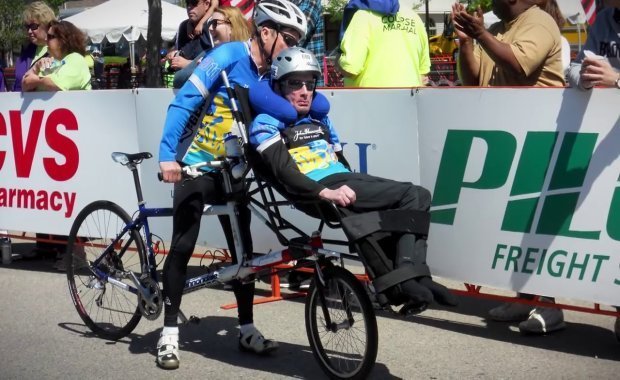 The incredible story of Rick and Dick Hoyt is a fantastic story of a person who had absolutely no chance in life.

Severely disabled. And all doctors believed that they were also seriously mentally disabled.

But this person later worked in college – and became world-famous for his example.

Read the moving story – and find out that your reaction is the decisive factor for your future success and your future quality of life.

I always remembered this story, and gave me the strength to keep going.

The incredible story of Rick and Dick Hoyt. The father who never gave up fighting for the happiness of his son.

This love story began in Winchester, in the USA, 43 years ago, when Rick was born, the oldest of Dick Hoyt’s three children. During delivery, the umbilical cord wrapped around the child’s neck, strangling him. This accident prevented oxygenation of the brain and caused a brain injury with irreversible damage that disabled him to speak and control the movements of his limbs.

At nine months of age, the doctors said: “Get rid of him, it is better to admit him. He will be a vegetable all his life. We cried a lot but decided to treat him like a normal child. He is the center of attention and is always included in everything,” says Dick Hoyt.

Rick always had love, but no one knew until he could understand what was going on around him. His father and mother did not give up, and as time passed, they noticed that Rick’s eyes followed them around the room. At age 11, he was taken to the engineering department at Tufts University to see what the chances were that his son could communicate.

“There is no way. -they told Dick- His brain has no activity. So we asked them to tell a joke, and Rick started laughing. ”

These scientists developed a communication system for Rick. With the lateral movement of his head, the only one he manages to control, he could choose letters that passed on a screen and, thus, slowly, write words.

He was 12 years old, and everyone was betting what the first words would be. Would it be “hi mom”, “hi dad”? No. He said, “Go, Bruins,” incentive phrase to the Boston Bruins hockey team, “says Dick.

Rick participated in everything. And that’s how the idea of ​​running came up.

“A colleague from the school had an accident and was paralyzed. A race was organized to raise money for the treatment. And Rick, through the computer, asked: ‘Dad, I have to do something for him, I want to participate. I have to show him that life goes on, even though he is paralyzed. I want to be in the race, ‘” Dick recalls.

“Dad, during the race, I felt my deficiency disappear.” – Dick Hoyt

“I was 40 years old, and I was not an athlete. I was running three times a week, 2km, to try and keep the weight off. So we started to run in the middle of the group, and everyone thought that we would only make it to the first corner, but we managed to do the full course, reaching almost the end, but not last.

As he crossed the finish line, Rick had the cutest smile I have ever seen on his face. After running that 8 km marathon, I had a whole week with pain throughout my body; this time, I felt like the invalid.

When we got home, Rick said to me through the computer: ‘Dad, during the race, I felt my deficiency disappear.‘ He told me that he felt like a free bird because he felt free to run and compete like anyone else”.

Rick’s words changed the life of Dick, who insisted on giving Rick that feeling as many times as possible. He began training and working so hard to get in shape until Rick and Dick were ready to compete in the 1979 Boston Marathon.

“Nobody spoke to us; Nobody wanted us in the competition. What they did not know is that Rick’s happiness was the reason that pushed me to participate in the competition, “says Dick, against everyone; they went ahead.

A year later, they participated in the first marathon. Five years later, we had the idea of ​​the triathlon, but to participate in a triathlon with his son Dick, he had a series of problems to solve.

First: equipment. There was nothing like it on the market. All the competition material had to be developed for him. And at every competition, Dick had to arrive early so that he could ride everything he needed.

But Dick Hoyt had a bigger problem to solve to participate in the triathlon with his son. Something fundamental. He couldn’t swim. So they moved house, they went to live on the shore of a lake so that they could train.

Between the first day on the lake and the first triathlon, just nine months passed. The problem of swimming was solved, but Dick had one more difficulty: since he was six years old, he did not get on a bicycle.

Cycling was the most challenging part of the Hoyts. The bike they used was almost six times heavier than the other competitors’, not counting Rick’s weight.

“Nobody taught me to swim, or to pedal, or to run like an athlete. We just did it together, our way,” says Dick.

In this way, the father and son faced the most incredible challenges. The most impressive: the ‘Iron Man’ (man of steel), in Hawaii, the hardest of the triathlons. It’s 3.8 thousand meters of swimming, 180 kilometres of cycling and a full marathon at the end: 42, 195 kilometres in more than 13 hours, a superhuman effort.

Dick and Rick overcame mistrust. Today they are loved and respected wherever they go. They receive incentives from other competitors, and even thanks.

Since 1980, they have participated in six editions of ‘Iron Man,’ 66 marathons and different competitions. Father and son completed 975 tests together. They never left one, nor reached the last place.

They are proud to say: “We came close to last, but never last.” And always with the same ending: A moved audience, open arms and Rick’s beautiful smile on the finish line.

“We came close to last, but never last.” And always with the same ending – Team Hoyt

At age 52, pushing Rick, he set an incredible 2 hours 40 minutes in the Boston Marathon, just over half an hour above the world record. An excellent brand for a hobbyist, great for a person of that age and incredible for someone who runs pushing a wheelchair.

Rick is now 46 years old and graduated from Boston University with a particular education degree.

Dick is an older man with a lot of vitality and a will to live, and they made history, beyond a father and son bond, an inseparable “Team Hoyt” life team.

Why am I telling you this story?

With so many disadvantages and challenges that Rick Hoyt has had to deal with in his life, it is absolutely impossible to lead a life with a high quality of life. Or does it?

Rick Hoyt is the personification of the fact that it is not the event that determines a person’s quality of life, but the way in which we react to the event.

I’m sorry, but there are no excuses!

There are no excuses that you cannot live the life you want.

Maybe you have to take a detour?

If you can’t walk, let someone push you.

If you can’t speak, communicate differently.

But make three powerful decisions now that will change your health, your finances, your career, your relationships, your whole life – make them now and act accordingly!

Hopefully, this story motivates you, like me, to keep going and that no obstacle prevents us from achieving our goals.

Recipe for success: 11 Characteristics successful people have in common

20 Essential skills an entrepreneur must have

How to be a good leader: Eliminate these 7 bad habits to be the best boss

15 famous entrepreneurship quotes to motivate you when you feel unmotivated